Ross Kemp battles for the Amazon in new TV documentary 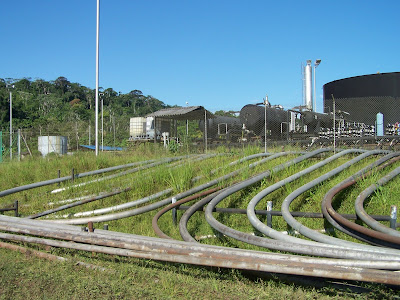 If you are in Britain you will be able to see the new Ross Kemp documentary: Battle For The Amazon. The programme airs on Sky 1 at 10 pm on Tuesday April 20th and Wednesday 21st.

Ross visited the Huaorani Ecolodge at the end of last year and interviewed our partner and Huaorani community president, Moi Enomenga. He learned how our Huaorani Ecolodge is providing a sustainable alternative to oil production while protecting the incredible biodiversity and unique indigenous cultures in the Ecuadorian Amazon.

The show will look into the socio-economic and environmental pressures facing the Amazon regions of Brazil and Ecuador. It will explore the legacy of devastation created by a global desire for energy, food and mineral resources.

The series will form part of a line-up of programmes commissioned by Sky1 HD and other channels to highlight the plight of the rainforests to be aired throughout April. In October 2009 Sky joined forces with its customers and WWF to launch Sky Rainforest Rescue, a three year project to help save one billion trees in the state of Acre in northwest Brazil. A donation of just £20 will help save 1000 trees and Sky will match every donation up to the joint target of £4 million.

Photo: Oil production has devastated large areas of the Amazon. Oil revenue may be indispensable for national budgets but at what cost for the local people and the environment?
Publicado por Andy Drumm en 8:17 PM